K! Pizzacone - Pizza in a cone! 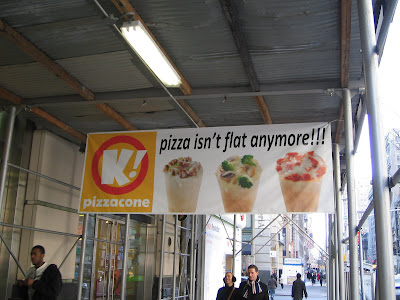 K! Pizzacone is now serving pizza in a cone during soft-opening. They will be officially opened on Monday, Feb 22, 2010.

On Fifth avenue between 32nd and 33rd street, in a mini store-front which was previously occupied by the Golosi gelato and it is few steps from the Jamba Juice.

Besides pizza in a cone they also offer breakfast cones with scrambled eggs, ham, bacon, etc. as well as dessert cones with ice cream, banana-flambe, chocolate and berries...

You can either order a large ($5.90) or a small size cone ($4.90). Add on ingredients are $0.50 for one and $1.00 two or more which is great deal. There are about twenty ingredients which you can customize your pizza in a cone; anything from sausage to BBQ chicken, from Prosciutto to Spicy Salami. There are also pre-selected versions like Mozzarella and Tomato, Four Cheese, Mushroom and Bacon, Pepperoni Grilled Chicken and more...

For the initial test I ordered a large cone with mozzarella and tomato sauce which is basically a Margherita without the basil. Once the combo is made it takes about 7-10 minutes in the oven for the cone to be ready but once you take a bite you wonder how come no one else came up with this concept before. I thought the dough was nice and crispy but a bit on the sweet side same goes for the tomato sauce.

This is a great meal on the go and you don't have to worry about the oil dripping or hands getting greasy. You can either get a cone sleeve or a little to go box which the cone fits perfectly.

I was told they are open from 7AM to Midnight once they are officially open on Monday. I can see this place  becoming popular really quick so grab a cone soon before the lines...

Sebastian Saint
New York, NY, United States
I am a New Yorker! I live and work in Manhattan. I enjoy going out to eat and drink. With over ten thousand places in NYC, it's easy to find new restaurants and variety of cuisines to experience. Here you will find my notes, reviews, updates and opinions on restaurants, food, drinks, etc. When I travel you will also see updates on hotels, restaurants and bars from other cities and countries. I am truly grateful and thankful to be able to experience life to the fullest in the greatest city in the world.