I have been waiting for this place to open for over a year now. Their original launch date was Fall 2009 but I guess unexpected issues caused delays in opening. 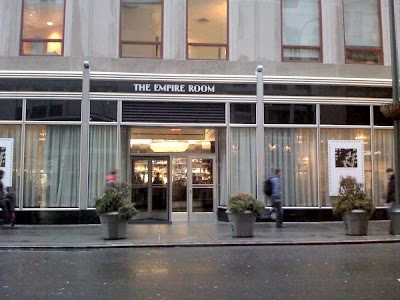 The Empire room is located on 33rd street between Fifth avenue and Broadway. For those of you are familiar with the area, you'll know that this is where the old post office used to be and it is huge.

It has a classy old feel to it. You can certainly see the similar 1920 Art Deco details from the Empire State Building with wall decorations, chandeliers, fancy furniture, etc. This is an upscale establishment with well made drinks and prices to match.

They do make one hell of a dirty martini and I'll be back again to try few more, hopefully someone will treat me next time. There were some snack options but that's for the next time.
The Empire Room
350 Fifth Avenue
{on 33rd street between Fifth avenue and Broadway}
Manhattan, NY 10001
(212) 643-5400
Email Post
Labels: The Empire Room

Sebastian Saint
New York, NY, United States
I am a New Yorker! I live and work in Manhattan. I enjoy going out to eat and drink. With over ten thousand places in NYC, it's easy to find new restaurants and variety of cuisines to experience. Here you will find my notes, reviews, updates and opinions on restaurants, food, drinks, etc. When I travel you will also see updates on hotels, restaurants and bars from other cities and countries. I am truly grateful and thankful to be able to experience life to the fullest in the greatest city in the world.